This post from Permission to Suck expands on the spirit of my first ‘What is Beauty’ post.  The image on the wall created by a person who paid a significant cost to make it intrigues us more than the image on the wall created by a machine via a formula.  They may be ascetically comparable – heck, the formula generated image by even be superior, but we admire and respect and value the man made image because of the effort and the skill that went into it. The final piece represents the victory of the human mind and hand to overcome the challenges to make it. The same spirit we admire in the sports world exists in the art world. The greater the pain, the more complete the victory the more we admire the result.

It’s not as much about the final image – it is more about how the artist got there.

We value the Michelangelo ink sketch more than the most intricate piece from our local art student because those few lines capture everything Michelangelo went through to become the artist he was. I hung a lot of student art of which I remember little. But the Michelangelo ink that I held briefly is burned into my memory. We celebrate Van Gogh’s madness and see it in the swirls and ridges of his strokes. I’ve often wondered if his work is a result of his going mad, or was going mad the result of his work. Either way the spirit is there. The frustration, the dedication, the passion.

I can make images today that are technically superior to Stieglitz. I have better tools, better paper, superior inks. Even ascetically I think I can compete or even better him. For example – ‘The Steerage’:

This image has never really done much for me. Composition isn’t bad. The lines break up the planes nicely, add some interest to what is basically a crowd shot. Some interesting shapes. But it’s a crowd shot. I’ve taken lots of crowd shots – I’m not big on crowd shots. So why is this one so valuable? It is a well composed crowd shot.  A moment in time that doesn’t look to bad. Does that make it special?

But put it in the context of the time, the tools used, the man who took it, the journey he was making to becoming a significant player in the development of American art, then it has interest. Then we stare at it and make up reasons why it is significant.

Here’s a quote on ‘The Steerage’ from Wikipedia:

The Steerage is a photograph taken by Alfred Stieglitz in 1907. It has been hailed as one of the greatest photographs of all time because it captures in a single image both a formative document of its time and one of the first works of artistic modernism.

Nothing there about how beautiful it is. No, it’s about the person, the place, the time.  If you don’t know the history behind it, it holds no real interest. You’d walk by it in the museum. You might think, “There’s an interesting crowd picture” and continue on.

Photography’s key draw is its ability to capture a moment in time. Everything there actually existed for that moment. Photography is an effort of exploration, of finding. You don’t go out to build a photograph, you ‘find’ a photograph. You may build the set, but the photograph itself is not the set – it is a representation of that set in a moment of time. Now PhotoShop is blurring that line, but in its purest state, it is reality captured in a moment of time. Add skill, technique, the flow of life around and in the image and something intriguing and ‘beautiful’ is created.

Here are some quotes from the Permission to Suck posting. It’s called ‘Creativity is Interesting, Virtuosity is Inspiring’. Please read the whole thing. It’s worth the effort:

Well… to be honest, I’m getting little tired of hearing about how creative I must be; F%$# you, I’ll be who I am – you go and be fresh and new and different, I’m going to concentrate on being a better me.

Creativity is a common and natural act. Yet, being a virtuoso is the ultimate analog goal requiring sacrifice. Great musicians, fine artists, writers, and even athletes inspire awe in what is possible when a life is devoted to skill honing and potential accomplishment. Success is visceral.

The devotion to a skill that produces useless beauty is virtuous. Aesthetic aptitude + highly skilled craft + just enough creativity to be interesting = Virtuosity. This equation says nothing about being original just to be original.

To be authentically original is to make the sacrifice to be a virtuoso.

I’m thinking when I break this need to to impressive work for other people, when I transition to doing it to push myself, to see what I’m capable of, then I will have the chance to do something excellent and amazing. Anything else is simply a drive to mediocrity.

Something like this pepper by Edward Weston. I love this. You may or may not, but I do and that’s the magic of the whole concept. There’s beauty in this image for me because of what Weston did with a common place object within the realm of his art. 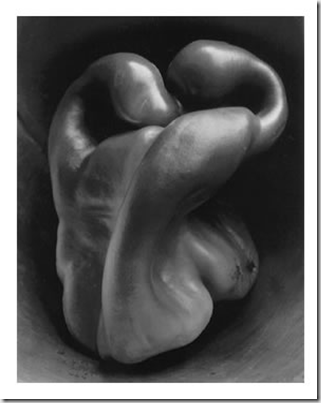 Watching this brought back the question I’d asked JP (John Paul Caponigro) when I was in Moab in May. Standing there on a corner of a motel parking lot on the street of Moab with cars and trucks rumbling by. I remember the place, his face, his voice, but the message was slipping away. In this two minute clip Kevin Spacey repeated it and brought back that moment – same words from two great artists.