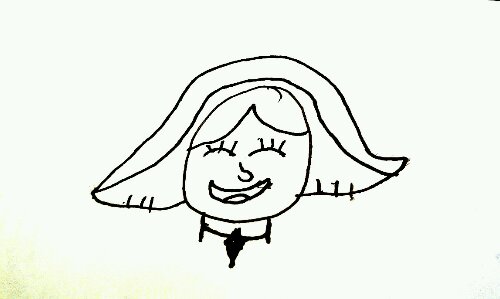 K drew this self portrait for me so I will remember her while I’m at camp.

I’ve finally finished going through my Arches images.  I pulled and finished 23 images out of the approx 900 that I took in Arches and Canyon Lands National Parks last month during the John Paul Caponigro Workshop. It was an amazing week end with an inspiring group of people. I left Moab with great memories, fresh, inspiring insights and enough new images to provide months of material to practice my finishing techniques.

This selection represents the strongest images from that weekend. I explored a number of different techniques as I worked through them, applying what I thought worked best for a particular image, a few times just playing around until I came up with something I liked.  In the spirit of the blog, this group of images isn’t so much a finished display piece as it is an exploration of possibilities. It shows different techniques hopefully mostly successful.

I’m by no means finished. I want to do some black and whites. I have a motion series I want to pull together. But I also need to get out and shot some new stuff to keep pushing and growing. To keep my eye in practice.  And to provide more material based on what I’ve learned from this group.

I hope you enjoy it. Please feel free to leave comments about what you like, or don’t like.

Next week is Scout Camp. Lots of trees, mountains and Boy Scouts, not much in the way of technology. So I might not be around for a bit. But I’m taking my camera and hopefully I’ll find some time to sneak away and explore a bit.

I’m still working through my Arches images. I’m almost done. I’ve been holding back because I didn’t want to finish and not have anything new to show off. But I decided to prime the pump a little tiny bit.

I bracketed almost everything I shot and I’ve HDR’d most of them. But I did that just to give me a full exposure range – not to ‘HDR’ the final image.  I HDR’d the raw images to broaden the range, loaded them back in Lightroom then processed them normally from there.

This image just wasn’t making it for me. It was close, but I wasn’t excited. Then I had an urge – let’s HDR it hard. I’ve never tried it before, so this is my first. 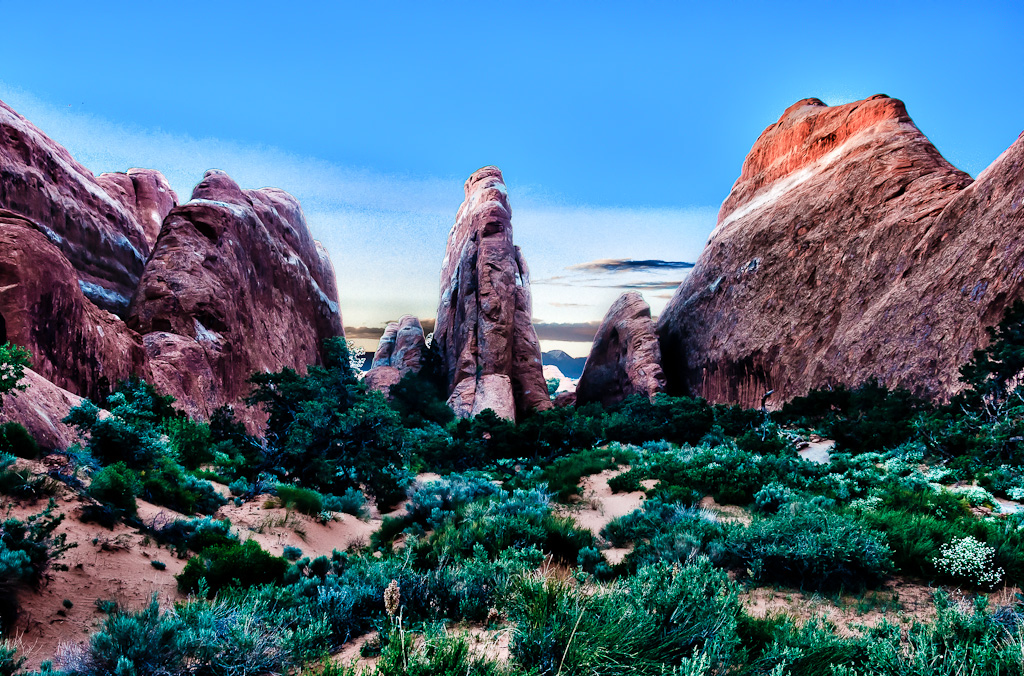 I miss being able to cuddle him against my shoulder.

One of my first mess arounds with Photoshop. 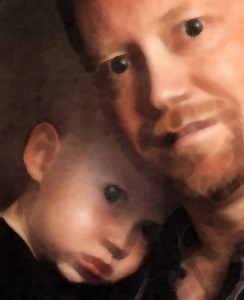 Happy Father’s day to all of the Fathers out there. 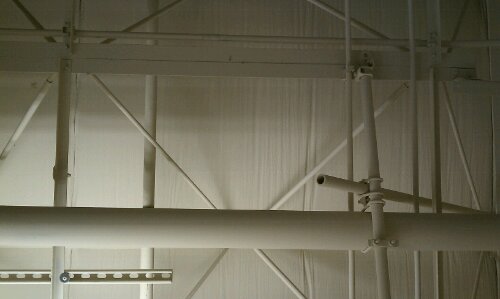 The other day I looked up while sitting at my desk.

Something new from a twist of my head.

Posted from WordPress for Android

Our first morning JP (John Paul Caponigro) instructed us to find the story. He told us we should go so far as to write it down. Of course I cringed inside. Writing goes deep, it requires engagement of muscles that I seldom use.

After that first round of shooting, while I was waiting for the last couple of people to finish I wrote the following:

The process of accumulation and erosion

Building up then tearing down

The beauty of ruined structures

The awesome majesty you feel as you approach these structures is what the builders of the cathedrals attempted to capture.

They captured some of that feeling – but these structures eclipse those.

Sounds of scuffling feet, tripod clinks and the chitter of the swallows in the cliffs, swirling around above as they chase one another.

For the third time in too many years I set up the lights, hung a backdrop on my new backdrop rig and shot with my new soft box.

The occasion was K’s baptism and A’s new suit. R has recently decided she doesn’t like her picture taken, so nothing of her. 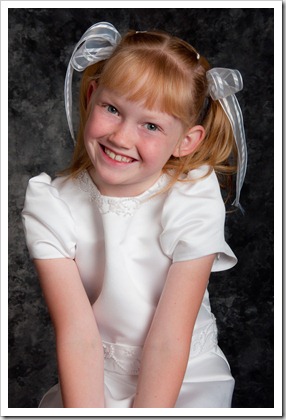 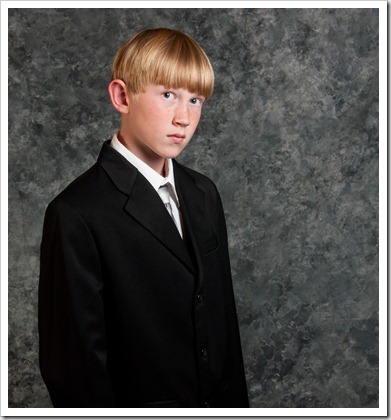 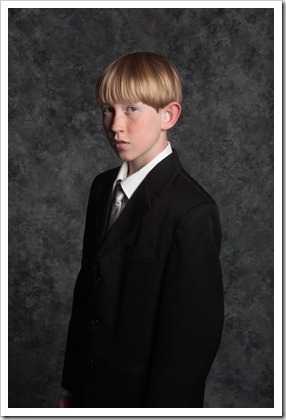 Best friends (most of the time), brother and sister. 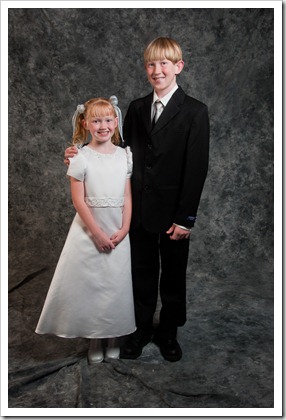 Fatherhood has its benefits.

While we were in Moab we took hundreds of pictures of beautiful, powerful rock formations against plain, boring skies. A lot of blaa blue and slate grey – with the occasional cloud.  Sunday night we had a pretty good storm blow through, leaving a cold day on Monday and a new weather pattern – this one with clouds.

Just outside of Moab I stopped and shot a pano cloud shot. I stopped two more times between Burley and Boise and shot more clouds. Outside of town where the horizon was flat and there wasn’t a lot of clutter and there were wonderful cloud formations.

I didn’t do very well on the Moab set and it was still a bit grey. But the Idaho sets were clean and I kept the sequence simple.  I shot 3 1 stop brackets all the way around.

I wasn’t sure how well Photoshop would do stitching them together. Was there enough information in the images for it to hook them up? I included the ground as I shot, but not much. So I wasn’t sure how it would do. I was pleasantly surprised.

The first one I tried I processed via HDR. I did the HDR processing on each shot, before I merged them. I used CS5 and did a soft merge – enough to build a full exposure range. I saved the settings and processed all of the images with the same settings.  Then I ran it through the pano merge – using the auto method:

This is a 7 image merge, almost the entire way around. It merged beautifully. I didn’t do anything to help this – it was all Photoshop. It did a great job.

Then I processed the base images to see how it looked as a non-HDR:

I actually like this one better. The overall exposure range is less and it is less contrasty, but I like the look better.

The second one is a non-HDR from 13 images. On this one I followed a cloud formation up in the middle. I had 12 images even with the horizon and one shot up a level right in the middle. Again, I wasn’t sure if Photoshop would pull it in clean:

Again, it joined it without a problem.

I’m not into skies for the sake of skies. But they will be good resources for other shots that need something in the sky, like some of my Arches pictures. I dropped the last sky pano into the following Arches shot and it helped a lot. It was nice having such a big image – it let me drag the sky around until I found a good match.

The first one as I shot it: 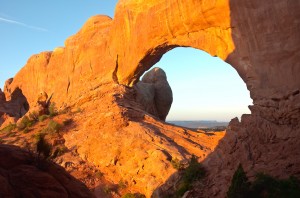 The same image, with the clouds added: 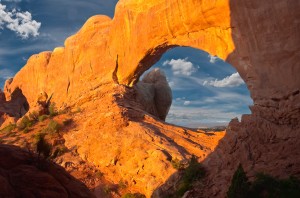 Because the lines along the rock were well defined the selection was pretty simple using the quick select tool. But I had a halo around the inside of the arch, on the left side. I tried to feather that, a bunch of times at different settings, but that didn’t help. I was about to do the unspeakable and actually ask our Photoshop person at work for help when I found the solution in one of my Photoshop books. Just read it, didn’t even realize it was the solution until I tried it a few days later.

It was pretty simple – brush in white in overlay mode on the mask. Cleaned it right up.

I’m still going through my Moab images. I pulled out about 40 shots that might work. I’m through the first 12 or 13. When I get though them all I’ll put them together as a slide show and post it. Some pictures I’ve already posted and some new ones.

I’ll try to make it worth the wait.